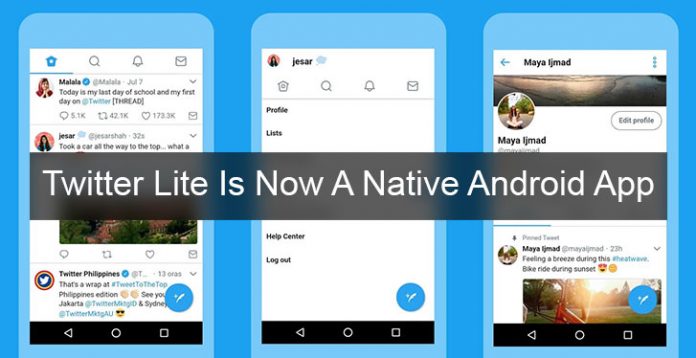 Twitter has finally released Twitter Lite, a lite version of the Twitter app that is targeted at places with low network and for those that don’t want to consume much data or battery power when using Twitter. Before now, twitter introduced a web shortcut of Twitter lite but now, the stand-alone app is available for android devices.

Recall Facebook, LinkedIn and Messenger Lite now have lite versions of their app to make it more accessible for people with poor network connection. Some of the advantages of “lite apps” are; ability to work and load updates smoothly on poor networks even on 2G or Edge networks, the lite apps doesn’t consume much of your data, the app sizes are always less than 1mb, they has almost the same features as the regular app except for very few ones.

In terms of this Twitter lite, it has most of the features available in the regular app including push notifications but it doesn’t support switching of two accounts.

Here is Twitter’s statement on this app;

The Twitter representative went on to say the app was “an experiment,” and the company is still evaluating on bringing it to other markets. Like many other ‘Lite’ apps, Twitter Lite specializes in using as little cellular data as possible, even including an extreme Data Saver mode that only loads images and videos when tapped on.

AVAILABILITY AND WHERE TO GET IT