Sergio Aguero Was Forced Off For Barcelona, Appeared To Be Struggling Breathing 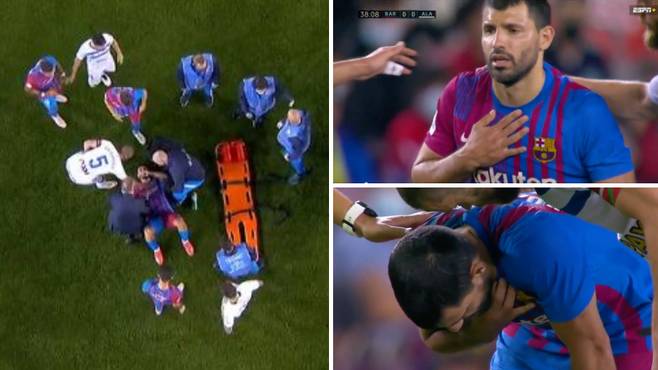 Sergio Aguero had to be forced off for Barcelona this evening after having difficulty breathing.

At the end of the first half, the Argentine striker won a header in the air but then fell to the turf and looked in immediate discomfort.

In some worrying scenes, Aguero was seen holding his chest and looked to be suffering from breathing problems.

A stretcher was brought onto the pitch while the Manchester City legend received medical attention but fortunately Aguero was able to walk off the pitch.

Aguero, who made a first start at the Nou Camp for his new club, was replaced by Philippe Coutinho in the 40th minute.

In their first game following the sacking of Ronald Koeman, Barcelona drew 1-1 with Alaves, with Memphis Depay’s opener cancelled out by Luis Rioja early on in the second half.

Although he was taken to hospital in an ambulance, Jose Alvarez, who is close to Aguero, says the player was taken off as a precaution but will undergo further tests to see the extent of the problem.

Aguero made the move to Barca on a free transfer in the summer after ending a glorious ten-year stint with City.

However, not long after he signed, his close friend and compatriot Lionel Messi sealed a shock departure from the club and joined Paris Saint-Germain.

Aguero was sidelined with injury very early on and did not make his debut until October. He scored his first goal for the club in the 2-1 loss to Real Madrid in El Clasico.

MUSIC: A Yunus – So A Zuciya