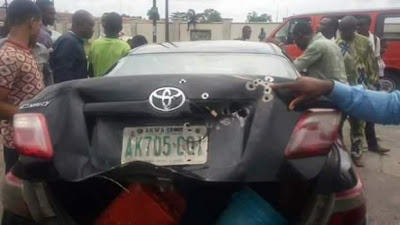 There was commotion at a street in Uyo, Akwa Ibom state after men of the Nigeria Police opened fire on people scrambling for money scattered in the streets of Uyo, Akwa Ibom State, by armed robbers on Wednesday.

One person was shot dead by the police during the commotion, according to reports.
The incident happened after the robbers had attacked occupants of a vehicle who had withdrawn a huge sum of money from a bank and were heading to government House Uyo.

They were ambushed by the robbers who collected the money and decided to spray some for the locals.

The shooting of the victim caused serious pandemonium in the area as the youths reportedly went on rampage.