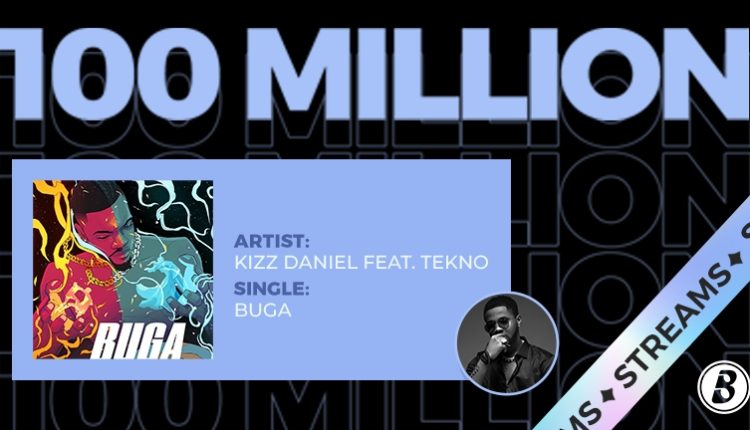 The hottest Afrobeats song of the moment ” Buga ” by Nigerian artists Kizz Daniel and Tekno has attained yet another monumental feat as it amasses over 100 million streams on Boomplay , thus , making history as the first song to achieve this on the streaming platform .

This announcement is coming on the heels of Kizz Daniel’s recent milestone achievement as the first most streamed artist on Boomplay .

Originally released on May 4 , 2022 , ” Buga ” talks about money , motivation , and jamboree and was an instant hit upon release . The song became the most Shazam song in the world .

Buga was also reported to have accumulated 1 million streams within 24 hours of release on Boomplay and peaked in countries such as Nigeria , Ghana , Cameroon , Zimbabwe , Togo , Zambia , DRC , Benin and Sierra Leone .

Commenting on this historic feat of Buga , Tosin Sorinola , Director of Artiste & Media Relations at Boomplay said ; ” Kizz Daniel is a truly brilliant artist and continues to surpass expectations with his artistry .

We are thrilled to witness another historic milestone from him and incredibly proud of the strides Buga is making on the global front .

Boomplay remains committed to building the most reliable and transparent music ecosystem in Africa and bringing everything music from around the world to Africans .

” Notably , the song has enjoyed groundbreaking moments on the music landscape , including impressive turnouts at Kizz Daniel’s US tours , which also shows the Pan – African efforts for Afrobeats ‘ International success has continued to see the global sound relished across different corners of the world .

With remarkable projects under his belt and recently Barnabas EP all of which continues to garner astounding listenership on Boomplay , Kizz Daniel is undoubtedly , one artist whose career is laudable and riddled with hit records and with the success of Buga , the record is well on its way to becoming the biggest.

MUSIC LOVERS!! Do You Still Think Kizz Daniel Is Underrated or His Attitude Is Killing Him?